To assist decision makers, analysts must deliver effective analysis that can be understood and acted upon.

One model that illustrates the role of analysis in policing is the ‘3i model’ (Ratcliffe 2004). 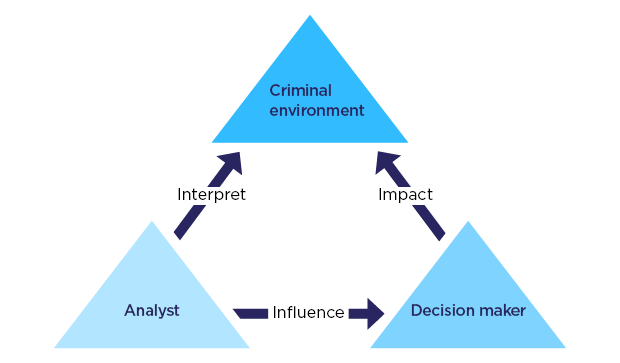 The look and feel of an analyst’s product is important. The quality and standard of production will make an impression on those who receive it. It is important that all products aim to achieve the best standard in order to command respect, foster trust and have the analytical work acted on.

Bottom Line Up Front (BLUF) is a good technique to use when producing written and verbal assessments. This is a technique whereby the analyst leads with their analytical conclusion to ensure that, if the customer does not have long to read the product, they will still get an understanding of the key message.

Analysts should follow their conclusion with the supporting evidence, from the strongest to the weakest, ensuring that it contains the ‘what’, ‘so what’ and ‘what’s next’ where necessary. Writing in this format ensures that the customer does not need to read the whole document in order to understand the main message.

Analysts must believe their bottom line. If not, they should write a new argument.

When writing, analysts should consider using the 4-3-3 (commonly used by the FBI). This should be used as guidance rather than as a fixed rule, as it is not always possible to follow. This principle states that:

This style of writing ensures that paragraphs are structured in a way that results in analysts using concise language that is easy to read and understand.

When writing reports, analysts should:

Products such as maps or charts that are more visual in design should be easily understood through effectively presenting the key elements, allowing for more detail to be obtained than through reading any supplementary report or other expanded output.

Graphs, tables, pictures, maps, infographics and other visual methods of presentation can all enhance a product. Indeed, in a visual world, they can form the core of a product, illustrating the relationship between key actors, for example.

It is important to include these only where they add value and to consider the value and impact of these in each case. There will be occasions where an image or other visual aid will be more effective in communicating a message to the reader than a volume of text.

Tables, spreadsheets and matrices are a useful tool for arranging large amounts of information. They can be used in the collation process and to develop complex charts at a later stage in the analysis. This might include using a table to illustrate sequences of events over a long period, where visual illustration requires too much space or creates too much complexity for the message to be understood.

Maps can help illustrate patterns of movement or demonstrate the relationship between different events. Various data can be overlaid onto maps to support this such as:

Hot spot analysis relies on using maps in particular to illustrate patterns of crime. In this context, it is important to choose the right type of visualisation in analysis and subsequently to illustrate the message, (examples could include point data, kernel density estimation, choropleth mapping or a mixture of these).

‘Infographics’ are increasingly employed and can be an attractive and engaging medium for communicating analysis, with key points reinforced by impactive visuals. It can be highly effective in communicating a message and can provide a high level of creative licence to the analyst.

There are many different types of infographics produced and it is a good idea to research examples to identify ideas for a style suitable to the subject matter. By setting out the key message or argument of the analysis (possibly as a ‘strapline’) and building the rest of the infographic to support this, an analyst can set out their work in a clear and persuasive manner.

Depending on customer requirements, an infographic could accompany a formal written report, or replace it altogether. In the latter case, however, it becomes even more important to design a way of capturing research and analysis that doesn’t appear on the infographic in case it is needed to answer questions about the work or in the future.

This scale demonstrates broad ranges of certainty or uncertainty that can be translated into consistent language. This language is then used in intelligence products in the context of any assessment, accompanied by the scale as an appendix to support interpretation. 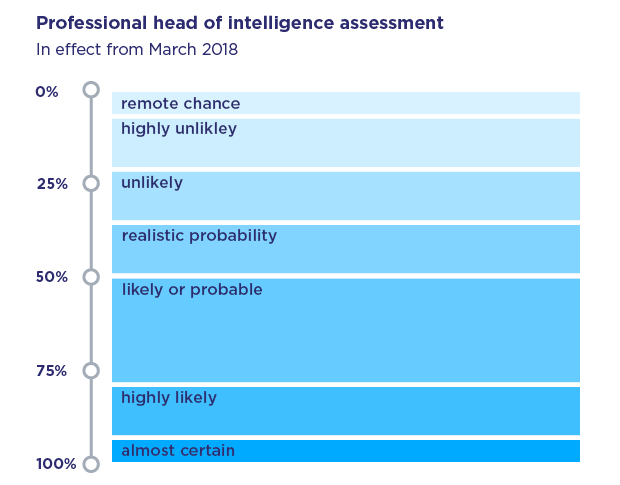 This consistent terminology also follows the national intelligence model (NIM) approach to common terminology and operating principles, whereby end users can expect to pick up an intelligence product from any individual in any force or agency and reliably know what the assessment is seeking to communicate around the certainty or otherwise of any judgements.

The scale was developed in response to two key challenges to effective intelligence assessment, namely the potential for:

A clear set of recommendations should be included in analytical reports. These should be based on the analysis and focus on key findings or information gaps relevant to the issue being analysed.

Analysts may make recommendations across a range of issues. This stage of the analysis may require analysts to engage with other analysts, researchers or other intelligence professionals, with operational specialists or with subject matter experts and to jointly deliver any recommendations, as required.

The key points to consider when developing a report are:

Analysts within certain functions may take a direct role in operational activity related to their work, particularly in areas relating to volume crime or antisocial behaviour. This might include taking part in problem-solving activity.

Problem solving is supported by analysis and is best achieved by adopting a collaborative approach. Collaboration should include subject experts (in crime prevention, neighbourhood teams, forensic staff, analysts, investigators, intelligence staff and partners) and, where relevant, a trained facilitator or someone outside the group to run problem-solving meetings or workshops.

Prior to meeting, all those involved must have read the analysis report or intelligence product. Researching best practice resources such as the College of Policing website for possible responses prior to the meeting can also be beneficial in understanding what has previously been used to counter similar problems. Also consider using organisational memory databases in force and results analysis reports. Any collaborative sessions may also benefit from using appropriate analytical techniques, including hypotheses generation and testing, SWOT, structured brainstorming or key assumptions checks.

Going beyond the descriptive

The value of analysis will most often be realised when the product provides an assessment that delivers insight, clarity and context. The purpose of the product will have been established through the TOR stage. Where a product is required to go beyond the descriptive, to explain why something has happened, to evaluate what something means or to estimate what might happen next, the analyst must add value (Pherson and Sullivan 2013).

Value may be added by using appropriate analytical techniques to make inferences, to generate and test hypotheses or to develop scenarios as required. It is important to communicate these and subsequent findings and conclusions effectively. Going beyond the descriptive should increase the potential for action to be taken by identifying actionable lines of enquiry, intelligence gaps or intelligence indicators.

Once the product is complete, review is a key step to establish that the product is clear and concise and responds to the original TOR. Reviews take a number of formats including:

The review might represent a planned milestone in producing the work or may be done prior to accepting the completed work. Stakeholders might include partners as diverse as the Crown Prosecution Service (CPS), for work presented in court, partner agencies for joint strategic or tactical products or government agencies which have tasked work out to forces.

Analysts should confirm that:

When planning the timescale for producing analysis, adequate time should always be built in for review. It is important to provide the reviewer with the TOR so that they are aware of what the analysis is trying to achieve and can check that any specific questions are fully answered. When seeking peer review, the analyst should choose a colleague able to provide an objective view.

Examples of the questions that the reviewer should answer include the following.

Dissemination should be agreed and set out in the TOR. Consideration should be given to who needs the information and the most appropriate format for dissemination. The amount of information disseminated will vary, depending on the audience. For one audience it may be appropriate to provide detail of the analysis. For others, it may be more appropriate to provide only the intelligence gaps and give direction on how they might be filled.

The analyst is responsible for producing and disseminating appropriate material. They should ensure that products are version controlled and comply with the corporate style and any minimum requirements. This ensures a professional approach and supports continual improvement of future work.

Specifically, the analyst must ensure that the:

Briefings and presentations are often used by analysts to supplement written reports.

They may also be used in the place of written reports to disseminate results to some audiences. Good presentation and briefing skills are an important part of an analyst’s skills and abilities. Some key elements to remember for preparing and giving briefings and presentations are:

The key points to consider when disseminating analysis are:

Back to Analysis overview