I am the service director for the College of Policing’s flagship leadership development programme, the Strategic Command Course (SCC). The SCC is the required entry point for those who wish to apply for chief officer roles in the future.

Its key themes this year are legitimacy, politics and inclusion. It could be argued that these have been key issues for policing since Sir Robert Peel founded the Metropolitan Police in 1829. More recently, the themes arose from the murder of George Floyd and the Windrush scandal – a realisation that society, government and policing has not done enough to promote racial equality.

Many people with other protected characteristics would argue we have failed them too. We’ve failed to develop an inclusive organisation that deals with a diverse public without fear or favour – one of our prime duties. The policing of climate change protests and the murder of Sarah Everard, with the resulting focus on violence against women and girls, underline that perception. That’s why the SCC directing team determined that senior leaders would study inclusion as a theme throughout the course.

Learning from our mistakes

In policing, our greatest public confidence gap exists with the Black Caribbean community. Questions of whether we remain institutionally racist, whether we are willing to apologise and whether we truly understand our predecessors' policing legacy are very current. Most importantly, the Black community wants to know what actions we are going to take to prove we are not a racist organisation.

I am not part of the Windrush generation but I am in my early 50s and in a generation that grew up with the 1960s-1980s as my formative years. My father was a Bengali Hindu from Calcutta who qualified as a doctor, and emigrated to the UK in 1961 as part of the ‘brain drain’ to reinforce the growing NHS. If the term 'Windrush generation' were to apply to Asians as it does to our Black Caribbean brothers and sisters, then I would be the product of that generation. In England, my father met an incredible White Welsh nurse, and my two brothers and I are the Mixed ethnic result of that happy 50-year union.

My father died in January 2015 and it was the worst day of my life. My mother and father, as leaders, teachers and parents, were my greatest heroes and inspiration – my mother still is. My sense of pride, resilience, work ethic and most importantly ‘duty’ comes from their example.

I was 5 when I discovered I wasn’t quite the same as everyone else, and my mother had to explain to me, in the rather prosaic location of a supermarket car park, why I was being racially abused. I grew up in a mainly White town and went to an all-White primary and high school, where initially the only person of colour was my eldest brother. Casual racism was a societal norm on the streets, on TV and in most of our institutions. My father was routinely insulted in front of me and I suffered harassment and abuse – as did my brothers. Yet it was not something we talked about much. We just got on with it. I was told I would need to be twice as good as everyone else just to be noticed (which gives you a tremendous sense of work ethic but also a real fear of failure), and I got on with my life.

My father was invited here to help build our greatest institution and, like the Windrush generation, with thoughts that he would be welcomed in rebuilding a post-war, devastated country. He and his Windrush cousins were not welcomed. They were abused. But my parents taught me that love was better than hate, and then went about caring for every type of person from every part of society, some of whom most certainly did not care for them.

The importance of celebrating Black heritage

Black History Month (BHM) is a chance to educate ourselves about the contribution that people of that generation, their predecessors and their successors, have made to these Isles. I grew up with the National Front marching down our streets shouting ‘there ain’t no black in the Union Jack.’ How very wrong they were. Learning about the great Black contribution to British society could not be more important today. Even though I wish we didn’t need a BHM, I want and need to celebrate it. Without it, many people would remain ignorant of that fact.

Without celebrating the achievements and contribution of Black citizens, their communities will not feel included. If you feel excluded, why would you seek integration? Why would you call this your home? Most importantly, if you can’t see it, you can’t be it, and the role models who we celebrate during BHM serve as an inspiration for a new generation of Black achievers who will help transform our society.

To me, we are the finest police service in the world but we can be much better. BHM points to one of the aspects of inclusion and fairness that we must continue to focus on and improve. I tell people that the world today is light years ahead of the world I was born into and my father travelled to, and policing is far more inclusive than when I joined – but we must be even better.

For those Black role models who don’t want to speak up, I understand, but I remind you that those who want to be like you, have to see you. Be proud. Speak up. Your contribution has been amazing and deserves to be known. 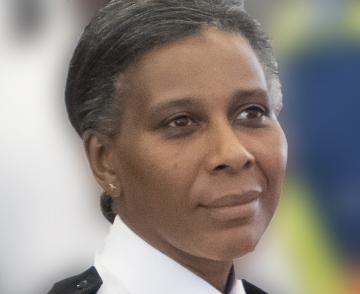 How a diverse workforce supports fair and effective policing
Spotlight on a role: Positive Action Lead