This explains the nature of disorder, and may assist in managing policing operations, events and incidents where there is a risk of disorder or a potential for disorder to occur or further escalate. Tension or disorder may be present in every community and social grouping. Its management should be regarded as a continuous partnership process rather than one of crisis intervention involving the police as a single enforcement agency. 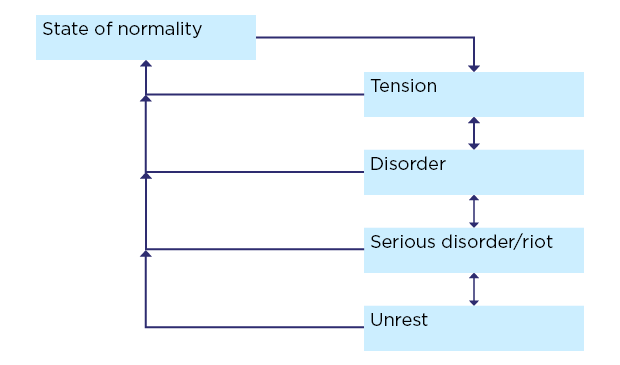 The day-to-day state of order and policing services provided within a community. This can vary widely from one area to another and even by time of day. Effective information and intelligence management provides accurate information as to the current state. It should be recognised that communities are complex in nature and may be permanent or transient.

This manifests as a level of increased concern or feelings within a community, group or crowd. A trigger incident may result in movement from a state of heightening tension to disorder. Such incidents can be caused by the police, the community or a third party.

This represents the stage at which mood is supplemented by action, whether isolated or sustained. It manifests itself in disruption, damage or violence. Such disorder may occur following a single trigger incident or a series of incidents that have a cumulative effect. At this level, unchecked or uncontrolled activity (including ineffective or incorrect police response) may deteriorate into serious disorder.

An escalation into widespread violent behaviour. This may take the form of violent protest, rioting, criminal damage, looting, and may include the use of weapons.

This is the period, sometimes prolonged, when the rebuilding of relationships takes place. Sensitivity and trust are key factors in this process. Police and partners should focus on a structured return to a state of normality, and should be aware that it is possible to cause a return to disorder/serious disorder through excessive or inappropriate action.

The police, in conjunction with partners, have a key role in contributing to:

Holding early neighbourhood level partnership interventions designed to mitigate the risk of escalation into disorder/serious disorder during the tension and unrest stages can help to achieve this. For example:

It may be prudent to prepare and test contingencies to ensure that the force is capable of dealing with any disorder should it occur. These contingencies should include the capability to provide a rapid surge in the level of any police response and the development of a systematic and structured approach to community engagement through neighbourhood policing teams. If disorder occurs, the objective of any police response should be to secure an early resolution. However, the response needs to be sophisticated and sensitive enough to reduce the likelihood of further escalation.

Used in conjunction with the national decision model (NDM) the disorder model may also assist in the threat assessment process and the recording of decisions made and their supporting rationale.

The NDM is used throughout the police service. The NDM is a scalable model that can be used before, during and after any public order operation. It provides commanders, officers, planners and advisers with a structured framework for rationalising and recording the decision-making process and managing a reasonable and proportionate police response. See the model for core information on the NDM.

Information and intelligence can be gathered from many sources, for example:

For further information see the authorised professional practice (APP) on:

Every police force has undertaken a strategic threat and risk assessment (STRA), based on intelligence management principles, in order to support tasking and coordinating processes and to ensure that operations are not conducted in isolation.

STRAs provide a link between relevant regional and/or national assessments, and the local threats and operational planning for basic command units (BCUs). It is important that BCU commanders are involved in their force's STRA process.

There is a distinction between a force’s wider STRA and the threat assessment applicable to public order policing which relates to a single police operation or spontaneous incident.

Assess threat and risk and develop a working strategy

Threat may be summarised as the source of actual or potential harm (that is, anything that can cause harm).

Risk refers to the possibility of harm occurring, and has been widely accepted as the measurement of both the likelihood and the impact of an event which could cause harm.

A threat assessment clarifies what is known, likely threats/risks, and the police responsibility for mitigation. In this context threat assessment refers to the considerations associated with policing public order, rather than health and safety risks. The focus when assessing threat should be on information gathering and collation, together with the analysis of threats and risks. Intelligence structures should be activated and actions taken to resolve intelligence gaps. Threat assessment highlights prioritised risks.

Threat assessment has an impact on the development of a working strategy.

Considerations include the following.

Two examples of threat assessment are:

Regardless of the method used, officers are expected to exercise professional judgement based on the circumstances they are presented with at the time.

In defining strategic objectives, powers and policy, considerations should include:

As long as there is a good rationale for doing so, it may be reasonable to act outside policy.

All police officers have an individual responsibility for ensuring that they are properly informed about the extent of their legal powers and the context within which those powers can be exercised. In particular, commanders should be fully conversant with the Human Rights Act 1998, and should consider seeking the advice of a legal adviser or public order tactical adviser as part of the decision-making process.

Contingencies are the ‘what ifs’ of a tactical plan and should be considered in the same manner as any other police actions. The nature of policing makes it impractical to identify every possible outcome of a given situation. Commanders should, however, identify a range of reasonably foreseeable scenarios and plan to minimise their impact on the policing operation.

Commanders should ensure that officers are clear on the actions they are required to carry out, the legal basis for each action, the tactical objective they are to accomplish, and any relevant tactical parameters. This should include clear communication of policing style and how this may be escalated or de-escalated in response to the circumstances (see policing style considerations). Effective and consistent briefing, debriefing processes and public order command protocols are crucial to the success of a police response.

Take action and review what happened

Once the tactical plan and any operational parameters are in place, the bronze commander will develop a deployment plan. Implementing the tactical plan involves choosing actions and contingencies that are reasonable and proportionate to the circumstances, and assigning those actions to the relevant police support units (PSU) and other police resources.

When managing any public order or public safety deployment, information management and intelligence management are an integral part of the process. Links into BCU and force level intelligence structures provide important contextual information and intelligence (for example, community tensions or reaction to a trigger incident) which, if managed effectively, can help mitigate the threat of disorder.

Regardless of the scale or type of event or incident, information and intelligence assist with keeping the peace and preventing crime. The development of relevant intelligence products helps to define strategic priorities and tactical options/responses during public order policing operations.

Information and intelligence is required throughout the lifecycle of an event or incident, for example:

Depending on the scale and nature of the operation, it may be necessary to appoint a BCU or force level intelligence manager to perform the intelligence coordinator role.

Events and incidents which present a risk to public safety or have a potential for serious disorder may present unique challenges to the management and investigation of crime. These include the:

For further information see the APP on Investigation.

The organiser(s) of an event have overall responsibility for its management, including the responsibility for public safety. Health and Safety Executive (HSE) (1999) The Event Safety Guide: A Guide to Health, Safety and Welfare at Music and Similar Events provides guidance for event organisers.

The relevant police force determines whether there is a need for a police presence at an event.

The police service is often viewed as the first point of reference for those who organise public events, the assumption being that the police can authorise or ban them. This is not the case, and a safety advisory group should act as the first point of reference for all those who are intending to organise a public event, whether it be on or off the highway.

Partner agencies should be involved in the planning and resolution of operations and incidents as appropriate. Protocols should be clearly defined and agreed between the gold commander and counterpart roles within all partner agencies. This ensures that each agency understands its role and responsibilities in the operation, and supports an effective line of communication between agencies.

The safety advisory group (SAG) provides advice and guidance on specific areas of responsibility for organisers and other agencies involved in organising a public event.

The SAG should be chaired by the local authority and include senior representation from the fire and rescue service, the ambulance service, the highways authority, the police service and any other relevant organisation.

There is no legal requirement for organisers to refer events to the SAG, nor to comply with its advice and guidance. It is, however, good practice for organisers to liaise with the SAG, or to provide a documented, rationalised justification for not complying with the advice it offers. A template can be used to communicate with event organisers who have not engaged with the SAG.

While the SAG may express its view on whether the police should attend an event, ultimately it is the responsibility of the relevant force to determine whether a police presence is appropriate and necessary. Events, particularly those of a commercial nature, should not require police attendance. The police may, however, be involved in the scrutiny of the planning as part of the SAG process.

The requirement for police attendance and action at an event is based on the need for the police service to discharge its core responsibilities:

In certain circumstances, action by the police may be appropriate when a pre-planned event is considered to be unsafe or could potentially result in significant disorder. Such action could be (but is not limited to):

The Licensing Act 2003 allows the police to make objections about a temporary event notice. These must be relevant to how the notice will undermine a relevant licensing objective.