Investigating the origins of seized cash and money laundering offences often leads to confiscation investigations. Confiscation applies in every case of acquisitive crime and is not just used to tackle serious criminality.

The primary objective of confiscation is to protect and recover assets so that they can then be used to compensate victims if appropriate.

The secondary objectives of confiscation are to:

Compensation orders can be generated from confiscation orders, see section 13 of POCA 2002 and section 130 of Powers of Criminal Courts (Sentencing) Act 2000.

Therefore the objectives of a confiscation investigation are to determine:

Confiscation is a process by which the benefit from criminality is calculated and an equivalent amount (where recoverable) is returned to the State.

Who can conduct a confiscation investigation?

All police investigators can contribute to successful confiscation investigations. However, they are usually conducted by financial investigators (FIs) because there are certain resources used in the process that are available only to FIs. These resources include suspicious activity reports (SARs), the Financial Investigation Support System (FISS) and the Joint Asset Recovery Database (JARD). (FISS is managed by the NCA Proceeds of Crime Centre and acts as a professional register, and provides resources and tools for FIs.)

FIs have good links with financial institutions and work closely with the CPS. This enables them to keep abreast of the case law surrounding confiscation as this is ever-changing and adds to the complexity of this type of work.

When considering or starting a confiscation the investigator should contact the Financial Investigation Unit (FIU) to discuss the suitability of the case. Assets should be restrained at the earliest possible opportunity to prevent the offender from dissipating the assets in question.

When is a confiscation investigation appropriate?

The investigator should consider at an early stage whether a confiscation investigation is appropriate, taking into account whether:

As part of the documentation requirements associated with the arrest of the offender, the officer in the case will be required to fill in the MG17 Confiscation Review Sheet. This contains questions that will also assist the investigator in deciding whether a confiscation investigation is appropriate in the circumstances. The question of suitability for confiscation proceedings should also be discussed with the CPS when charges are considered.

An abuse of trust (case study)

A social worker employed by a local authority social services department pleaded guilty to 10 counts of theft from an 83-year-old client who had been diagnosed with advanced dementia. The offences were committed over a 14 month period and more than £64,000 had been stolen.

The social worker had stolen the cash from the victim’s bank accounts, stolen her car, and had even sold her home. The defendant was sentenced to a total of three years and three months’ imprisonment. The defendant appeared again before the crown court for a confiscation hearing.

The court found that the defendant had a criminal lifestyle and had benefited from their criminal conduct by £67,599. A confiscation order was made in that sum. The court also made a compensation order in the sum of £67,599 and ordered that £54,081.72 of it must be paid from monies recovered in satisfaction of the confiscation order.

Both orders have now been settled.

This is the date from which the relevant parts of POCA apply, and asset recovery may still be considered. Confiscation may still be possible if the offence was committed before that date, under earlier legislation. Investigators should contact their FIU for advice in this area.

What are criminal lifestyle offences?

A confiscation investigation is mandatory under section 75 of POCA. A full list of criminal lifestyle offences is available in Schedule 2 of POCA, some of which are:

Otherwise, a person is considered to have a criminal lifestyle in the following circumstances:

What is particular criminal conduct?

Under section 76(1) of POCA the term criminal conduct is defined as conduct which:

However, the term particular criminal conduct refers to the actual offences that are proved in the current proceedings. It is used when there is no criminal lifestyle label but the offender has to pay a confiscation order to the monetary value connected with:

Role of the financial investigation unit

In addition to providing advice on the suitability of cases, on restraint, and on investigative strategy, in most forces the FIU:

The case of R v Waya (2012) UKSC 51 provides direction to investigators and prosecutors when calculating of benefit amount. The results of this case concern proportionality of ownership and issues associated with the accumulation of interest.

If the offender is found guilty of any criminal lifestyle offence such as drug trafficking, money laundering or brothel keeping, the court must make certain assumptions about the offender’s wealth and assets, and how they earned those assets. However under section 10(6) of POCA, the court must not make a required assumption in relation to particular property or expenditure if:

The court assumes that up to a maximum of six years before the defendant was charged, indicted or summoned for an offence, any property transferred to, held by, or expended by them was obtained as a result of general criminal conduct.

Note: property held would include assets that have increased in value over the period of time. Expenditure includes all actual expenditure incurred at the time of spending within the period of six years, irrespective of whether assets purchased had decreased in value since the date of the initial purchase. Additionally, there is a fourth assumption that the property is free of other interests such as joint ownership (by an innocent party) or a mortgage.

The flow chart shows how the assumptions are used to calculate this benefit amount in general criminal conduct cases.

At a small, local car boot sale, security investigators employed by the music sector investigated the sale of counterfeit music media. The operation resulted in the arrest of three people identified as selling counterfeit goods. The individuals were found to have a large number of counterfeit goods in their vehicle. Simultaneous searches of their houses found multi-burners set up to copy music and film media.

An average day’s takings were established and multiplied by the number of car boot sales operated on site. These were cross-referenced to dates when industry investigators had visited the site. The assumption made was that one seller had visited the site on every occasion that it was open.

A £30,000 benefit was declared at court and a confiscation order made for that amount. The defendant pleaded guilty to counterfeit offences and money laundering.

The FI who conducted the confiscation investigation is responsible for: 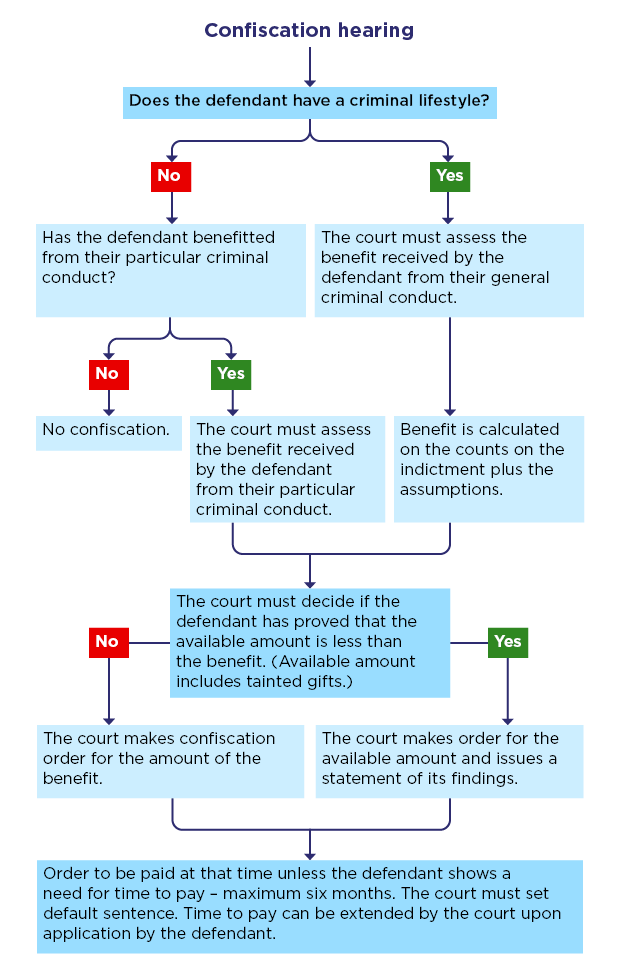 A case can be revisited at any time in the future when the offender has acquired wealth. This is used mainly as a preventive measure as a disincentive to the convicted person to commit further crime.

Outstanding benefit amounts should be added to the offender’s PNC record with an asset marker (shown as ‘AS’). When the offender comes to the notice of the police in a newly acquired vehicle, for example, the previous confiscation proceedings may be revisited, depending on cost implications (for example, the cost involved in recovering a low value car).

The police revisited a case of two persistent offenders previously convicted of low level crime and drug dealing. Their mother died and an insurance premium was paid out. As a nominal confiscation order had been made, the police were able to reapply the confiscation proceedings and ensure that the offenders paid back their benefit from crime using their recently acquired wealth.

If it comes to the attention of the authorities that a person has acquired new wealth (such as inheritance or through a lottery win), the remainder of the confiscation order will be enforced. Some forces have adopted a policy of reviewing outstanding confiscation cases once every three months, where resources permit.

Trigger points for revisiting cases include:

Investigators should contact their FIU whenever they discover that a person who has had confiscation proceedings against them has gained new assets.

The confiscation process may be reviewed in the following circumstances:

If the first three points apply, the application must be made within 6 years of the date of the conviction. The available amount can be reconsidered at any time. The assumptions regarding expenditure according to section 10 of POCA do not apply at this point.

Referral to the financial investigation unit

Confiscation case referral policies and procedures vary from force to force. Investigators should consult their FIU when referring a case. Most FIUs will ask the officer in the case to conduct a financial interview in order to provide the following essential information:

The process of a confiscation investigation may be described in the following stages:

The power to restrain assets is an essential tool in the confiscation process. Restraint is necessary to stop a person who has benefited from their crime from being able to dissipate or spend their money, or sell, transfer or hide their assets or property before it can be confiscated from them. A confiscation order is ineffective if there are no assets left to confiscate, so action is required at the earliest possible moment.

A restraining order can be obtained by an accredited financial investigator (AFI). The order requires a superintendent’s authority, and can be requested before criminal charges are applied.

Advice should be sought from the CPS as soon as the criminal investigation begins. The investigator should approach a senior CPS lawyer at an appropriate level in accordance with their local protocol. FIUs normally consult the CPS on behalf of the police in matters of restraint.

Restraint orders are generally applied for by the CPS. The application is supported by a statement made by an AFI.

Note – when considering restraint, investigators should be aware that this will alert the suspect to the existence of the investigation.

If the CPS makes an application to the court to appoint a receiver, the police will provide assistance within the timescale agreed. This includes obtaining any information or evidence needed to progress the application, such as obtaining an up-to-date valuation of current assets, and attendance at court to assist in the proceedings if required by the CPS.

Police actions to support confiscation order enforcement include assisting with:

The offender is responsible for paying the confiscation order amount to the enforcement agency. After non-compliance, however, the magistrates can either grant the defendant more time to pay, or order them to serve the default sentence as indicated below:

Note – even when a default sentence is served, the outstanding amount is still owed.

See Guidance for Stakeholders – Amendment of the Proceeds of Crime Act 2002 by the Serious Crime Act 2015.