The generic command structure, nationally recognised, accepted and used by the police, other emergency services and partner agencies, is based on the gold, silver, bronze (GSB) hierarchy of command and can be applied to the resolution of both spontaneous incidents and planned operations.

The terms gold, silver and bronze are used in the police service. However, the hierarchy of the terms strategic, tactical and operational may differ in some departments, agencies or organisations.

This structure provides a framework for delivering a strategic, tactical and operational response to an incident or operation. It also allows processes to be established that facilitate the flow of information, and ensures that decisions are communicated effectively and documented as part of an audit trail.

Most incidents and operations are resolved by using a simple GSB command structure, with the responsibilities and accountabilities of each commander clearly set out in command protocols. The command structure is role not rank specific and allows for flexibility.

It is essential that everyone involved in the police response clearly understands what they are required to do, how they are required to do it and when. This is particularly important where a multi-agency response is required, as confusion and uncertainty can lead to command paralysis where commanders are unable to make and/or communicate decisions effectively.

Depending on the needs of the situation, the command structure may or may not include all elements of GSB. Similarly, it may also involve local or basic command unit police officers and staff, partner agencies and, ultimately, the government.

To avoid this, consideration should be given to establishing a supporting chain of command for each element of the police response, which should be underpinned by clearly defined command protocols. The command structure should be appropriate to the needs of the operation and sufficiently resilient for its purpose.

The issues of span of command, span of control, command resilience and interoperability must be considered.

Below is an example of a command structure when responding to more complex incidents or operations. The example ensures that any interdependencies or potential conflicts are managed effectively, while ensuring clarity of command throughout the duration of the incident or operation. 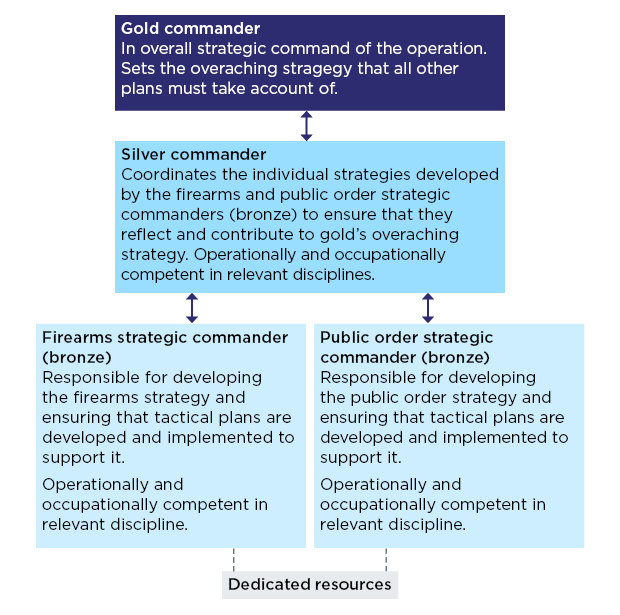 The command structure is role rather than rank specific. Officers of a senior rank to those nominated to undertake one of these three roles should not automatically assume superiority solely on the basis of rank or territorial responsibility. However, they are accountable for any information or advice given to commanders.

The GSB model offers flexibility and can be applied to any type of incident or operation. It is important to ensure that command structures are subject to regular review. They should be flexible enough to adapt to changes in the nature of the threat, incident or operation without jeopardising clear lines of communication or accountability and ensure that those performing the required roles are sufficiently trained and competent.

The gold commander assumes and retains overall command for the operation or incident. They have overall responsibility and authority for the gold strategy and any tactical parameters that silver or bronze commanders should follow. The gold commander, however, should not make tactical decisions. They are responsible for ensuring that any tactics deployed are proportionate to the risks identified, meet the objectives of the strategy and are legally compliant, particularly in terms of the Human Rights Act 1998. The gold commander chairs the gold group or the strategic coordinating group (SCG).

These vary according to the nature and scale of an incident.

Where the police respond to an emergency or major incident, a gold commander assumes overall command and has ultimate responsibility and accountability for the response to that incident. The gold commander chairs the SCG, which is the multi-agency forum operating at the gold tier of command.

These vary according to the nature and scale of an incident.

The bronze commander is responsible for the command of a group of resources, and carrying out functional or geographical responsibilities related to the tactical plan.

Bronze roles are created and disbanded throughout the period of an incident/operation and can be allocated based on geographic (commands a geographic area) or functional (commands a specific task, for example, bronze public order) considerations.

Bronze commanders must have a clear understanding of the silver commander’s tactical plan, that is, what they are required to deliver, in what timescale and with what resources.

Some bronze commander roles require specialist knowledge, skills and expertise and, therefore, should be allocated to individuals or post-holders who are appropriately trained and competent.

Back to Command and control overview