Missing persons, or ‘mispers’, is an interesting and complex part of policing. It is an area of demand – for example, here in Devon and Cornwall, missing people reports account for around 12% of what we do – and of risk and harm. In every force area, misper records tend to be made up of elderly people who are confused and lost, adults who are suicidal or in mental health crisis, children in the care system who are being exploited and other vulnerable people. In order to prevent mispers from coming to harm, it’s essential that we understand the risk involved.

At all ranks, I have witnessed inconsistencies in the way that this risk is identified and graded, as well as how resources are applied to finding mispers. When it came to deciding on the topic for my master’s thesis, misper risk assessment was top of the list. Thanks to support from the College of Policing bursary scheme, I was completing the Applied Criminology MSt at the University of Cambridge and had fallen in love with the concept of evidence-based decision-making in policing. It seemed to me that risk grading – and consequently, resource deployment – was applied to misper reports on a subjective basis. I wanted to know whether there could be a better approach.

Despite the importance of misper investigations in terms of the impact on individuals and families of those affected, and despite the volume of demand these incidents create for the police service, there is not a wealth of literature on the subject. A person is recorded as missing every two minutes in England and Wales, with over 300,000 missing person reports created by police each year (Fyfe and others, 2015). The College of Policing authorised professional practice (APP) states that going missing ‘should be treated as an indicator that the individual may be at risk of harm’ and bases the risk grades on the likelihood of this harm happening. Risk grades are described as:

However, this does not define how circumstances are determined as ‘likely’. Do officers truly understand how the answers to the questions they ask affect the likelihood of a misper coming to harm?

APP also states that risk assessment decisions should be informed by professional judgement and provides a list of recommended questions for officers to ask the person reporting the misper.

However, the research evidence base does not yet exist to test these questions. The ‘Safeguarding missing adults who have mental health issues’ report, released by the All-Party Parliamentary Group for Runaway and Missing Children and Adults (Coffey, 2018), specifically highlights this question set, describing how the lack of empirical research or validation may limit its efficacy and efficiency. The report outlines the importance of accurate risk assessments and warns of the tragic consequences that may follow when such assessments are not completed.

The experience and judgement of officers is clearly relevant and valued in the assessment of misper risk, but it is naïve to believe that these skills alone are sufficient to provide consistent and accurate predictions of the likelihood that a misper will come to harm. In a survey of 215 sergeants in one of the largest forces in England and Wales, Smith and Shalev-Greene (2014) found that almost half felt inadequately trained for appropriately assessing the risk of mispers and the potential for them experiencing harm.

An examination of police decision-making in the contexts of sexual violence and missing people investigations has highlighted that as the complexity of decision-making increases, so do the opportunities for officer error (Alys and others, 2013). There is a danger of officer indifference, which is more likely in cases where young people regularly abscond from care for short periods of time before returning of their own volition (Hayden and Goodship, 2013). They concluded that this culture and the sheer volume of missing children reports makes meaningful risk assessment for all cases impossible. My hope was that my research would inform the development of evidence-led decision-making support for colleagues.

Previous research noted that accurately predicting the likelihood of a misper experiencing harm is difficult. Each of the studies I read used low sample sizes – the largest was Tarling and Burrows (2004), with just over 1,000 records analysed. All studies found that the proportion of mispers that were reported as coming to serious harm or death was very low. A consistent theme from the research was the difficulty of developing a statistical risk prediction instrument. I remember the conversation I had with my thesis supervisor, Dr Geoff Barnes, as if it was yesterday: ‘Problematic doesn’t mean impossible, challenge accepted’. In order to achieve my aim, I needed volume. This would have to be the biggest misper study ever (and at the time of writing, it still is).

I undertook a retrospective analysis of the 92,681 Devon and Cornwall Police misper records on COMPACT, the record management system used by the force for mispers between 2008 and 2019.

I used a statistical test called odds ratios (ORs) to investigate how risk factors known to police at the time of report relate to harmful outcomes in missing person cases. It is worth pointing out that I am not a statistician. I started this research 20 years after scraping a C in GCSE maths, when I had never heard of ORs, let alone completed them on 92,681 records. However, I had a brilliant supervisor, an inquisitive mind and a research subject that I genuinely cared about. As it turns out, they really aren’t that difficult.

The OR was calculated to determine the relationship between the misper case resulting in harm and the list of factors and characteristics below:

For some factors, the sample was too small for meaningful analysis. For example, only 94 mispers were recorded as having a visual impairment, only 10 of whom came to harm.

I then divided the sample into gender (male or female) and age categories (juveniles, adults aged between 18 and 64, and those over 65), to develop separate analyses of predictive association. This allowed me to assess the importance of the predictors across age and gender categories.

Of 92,681 missing person records made in Devon and Cornwall between 2008 and 2019, 14% were graded as high risk, 76% as medium risk and 10% as low risk. 54% of all mispers were males, while 46% were females. The largest cohort of mispers were juveniles (59% of all records), followed by adults aged 18-64 (35%) and mispers aged over 65 (6%). Because previous studies described a very low number of people who came to harm, I aggregated all misper records for this study that had a ‘came to harm’ marker attached to them. This meant that emotional harm, sexual harm and physical harm were all included, along with fatalities. This resulted in a sample of 3,481 mispers who came to any type of harm (3.8% of the whole sample), broken down as follows.

The findings relating to medium risk stood out to me. I was interested that more than three quarters of all mispers were graded as medium, meaning harm was likely (but not serious), but only 5% of those actually came to any kind of harm. This suggests that we are not accurately assessing the likelihood of harm. I was also keen to understand why the amount of harm experienced was different across the age and gender cohorts, particularly in terms of those initially graded as medium risk.

There are a number of risk factors that indicate an increased likelihood of the misper coming to harm, regardless of their age and gender. Unsurprisingly, being suicidal is the strongest predictor of harm for mispers of all ages and is significant for all three categories. Adults aged 65 and over are the only category where being male can be considered to increase the likelihood of harm. For juveniles and adults aged 18-64, being suicidal, having mental illness, being female and having a disability are all significant predictors of a misper coming to harm.

The results of this study supported the assertion of the All-Party Parliamentary Group for Runaway and Missing Children and Adults (Coffey, 2018) that the current process lacks efficacy and is not accurate.

Medium-risk mispers are perhaps the most problematic when considering accuracy. Across all mispers in this study, more than three quarters (75.6%) were graded as medium risk. With high-risk mispers rightly being categorised as a priority, and low-risk mispers being categorised as no priority at all, where does that leave those assessed as medium risk? The high volume of medium-risk cases means that there is a likelihood of inconsistencies in the quality of investigation (depending on what else is happening at the time). With this category including so many mispers (70,046 in this study), it is not unreasonable to consider that there will be mispers who are close to being high risk, and those close to being low risk, all categorised as the same.

The proportion of medium-risk mispers that come to harm increases for younger mispers (30.8% for over 65s, compared to 84.4% for juveniles). This suggests that our current practice of assessing mispers of all age bands and gender in the same way is flawed, as it does not have specific-enough grade categories.

There are some limitations to this study, including the fact that there is no way of knowing how many mispers were prevented from coming to harm due to police intervention. However, analysing the largest sample size in known misper-related research has presented clear evidence to show that the three current risk grades are too wide in definition.

To help improve the accuracy with which resources and knowledge are used to keep the public safe, the police service and the College of Policing should consider developing an evidence-based risk assessment tool that uses the predictive value of known risk factors, as well as their impact on the likelihood of a misper coming to harm.

The recommendations from this research advocate for a departure from the current reliance on professional judgement and subjective decision-making, to a more structured system that considers the different risks of harm identified in this study.

This article is from the fifth issue of Going equipped.

Take our survey on Going equipped

Your feedback helps us bring you the content you want to read. Let us know your views on Going equipped so we can improve what we do. 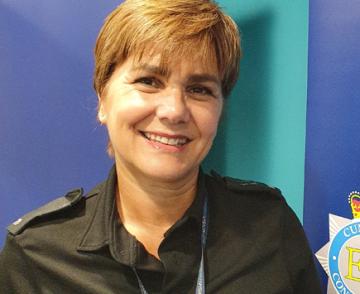