Dealing with the personal impact of crimes against children 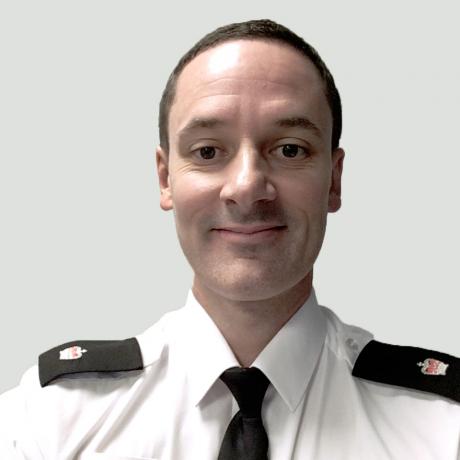 My interest in this research area examining the personal impact of crimes against children stemmed from my time as a DCI in the public protection unit. At that time, I was the force lead for child sexual exploitation (CSE), and our understanding of the investigative complexities surrounding these crimes were less well researched and less well understood. I managed our Paedophile Online Investigation Team (POLIT) and Local Safeguarding Teams (LSTs), and was also the force lead for the largest paedophile operation that Devon and Cornwall Police have ever run. All of this meant a lot of interaction with staff whose job it was to view indecent images of children (IIOC) on a regular basis.

Sadly, this was a growth area because of the explosion in internet technology and internet-enabled applications. This inevitably meant that someone from a law enforcement perspective would have to view images that could be extremely distressing. At this time, the Child Abuse Identification Database (CAID) was very much in its infancy. This led to a relatively small number of staff viewing huge volumes of distressing content. I was acutely aware that, because of the sheer volume of what was being discovered, these investigations were no longer being held by specialists. Increasingly, officers were investigating these crimes with little or no specialist training or insights into the levels of safeguarding required.

This was very much in the midst of austerity, with reduced staffing numbers and budgets. A greater understanding of investigator wellness and wellbeing was required if we were to sustain our commitment to investigating this tide of abuse. I wanted to build a greater understanding of the potential impact of viewing these distressing images, as well as the effect on investigators themselves.

Initially, I set about trying to identify what research was available locally, regionally, nationally and internationally. I was surprised to find that very little research regarding investigator wellbeing existed in this bespoke area. As a result, I decided to design a questionnaire to be used among investigators, with the hope that a better understanding would improve police wellbeing responses for staff viewing IIOC.

The findings indicated that 49% of investigators viewing IIOC felt that the work had a negative impact on their life away from work. Furthermore, 24% of respondents agreed or strongly agreed that the stress of viewing IIOC reduced their productivity at work, and 23% agreed or strongly agreed that they had harmful intrusive thoughts concerning IIOC investigations when not at work. Interestingly, less evidence (18%) was found to support investigators wanting to change their role within the police.

Therefore, it seems clear that staff experiencing ICE work reported negative consequences on their wellbeing. These findings support the limited available literature, which indicates that a proportion of investigators exposed to ICE work may suffer detrimental effects to their wellbeing (for example, Brady, 2017; Wortley et al, 2014; Perez et al, 2010).

There is clear evidence that viewing IIOC can result in medical symptoms that are likely to necessitate investigators taking sick leave as respite from their work. Wortley et al (2014) found that a proportion of ICE staff reported a clinically significant post-traumatic stress profile. Perez et al (2010) reported that over 30% of ICE investigators developed symptoms of secondary traumatic stress disorder (STSD). ICE investigators are at increased risk of developing STSD and burnout (Bourke and Craun, 2014; Burns et al, 2008; Sprang et al, 2011). These can result in a variety of negative individual and organisational outcomes, including depression and anxiety, both often leading to sickness absence, as well as increased rates of absenteeism and staff turnover (Bourke and Craun, 2014; Pryce et al, 2007; Travis et al, 2015). Despite work to identify negative impacts on ICE investigators, there is limited literature indicating how this transfers into workplace absenteeism.

In my study, it was identified that 5% of staff reported that viewing IIOC had contributed to them taking sick leave. In addition, 4% reported seeking medical help to deal with the effects that they felt resulted from viewing IIOC. While these are relatively small percentages, the impact on individual wellbeing may well be significant. Furthermore, if these impacts were scaled up to a regional or national level, the organisational impact is increased, as is the potential ability of law enforcement agencies to effectively deal with this abuse.

Powell et al (2014, p 555) have noted that ‘stressors place physical, psychological and social restrictions on investigative capacity’. This has clear implications on the implicit reduction of individual and organisational capacity. Wolak and Mitchell (2009, p 11) have also highlighted this issue:

The wellbeing of personnel who investigate child pornography cases is a matter of concern, not just for compassionate reasons, but also because unrelieved stress can reduce productivity and retention of the specialised and highly trained staff who investigate these crimes.

To properly understand organisational wellbeing, it is vital to have accurate records regarding absenteeism. However, if employees take a form of leave such as annual leave when in reality they are unwell, or take re-rostered rest days instead of taking sickness leave, this masks the problem. It also restricts our ability to deal with the early onset of problems such as PTSD or symptomatic depression. This has been termed as ‘leavism’. Hesketh and Cooper (2017, p 58) have found that ‘leavism undoubtedly and significantly skews the true picture of workforce wellbeing’. A recent study by Houdmont and Elliott-Davies (2017) identified that leavism is a significant issue facing UK policing. The authors reported that 42% of officers developing adverse psychological health symptoms had, on one or more occasion, taken annual leave or rest days when they should have taken sick leave.

The findings of my study support the emerging picture regarding policing and leavism. In all, 12% of respondents reported taking another form of leave as a coping mechanism to deal with viewing IIOC, as they didn’t want to take sick leave. There are a number of consequences to this. It is harder to identify issues and gain investment to facilitate wellbeing interventions, and it may also have a detrimental effect on individuals. For example, if an individual uses up leave when they should be sick, this means they cannot take annual leave at other times to recuperate. Additionally, the cause of the sickness may never be addressed, and so symptoms are likely to return. This has a negative impact on wellness and, in the long term, it is likely to increase absenteeism and reduce organisational productivity. A reduced staffing wellness profile might lead to reduced quality of service and a reduction in organisational ability to protect the most vulnerable in our society.

The impact of the research

I was very lucky to receive support from my force to improve conditions for officers and staff viewing IIOC. First, I wrote a paper for the force business board highlighting what I had identified, with recommendations for wellbeing-inspired change. These recommendations were accepted. I organised a multi-departmental group of key individuals, who were tasked to implement the recommendations across the force area. I was able to recruit committed and passionate people to this group, who were able to facilitate the wellbeing-based change needed. Over the course of 12 months, the group met regularly to implement the recommendations and reflect on how these new measures were having an impact.

A booklet was produced for all officers and staff viewing IIOC as part of their role. This highlighted viewing and coping strategies, and also gave advice and guidance regarding some of the more technical elements of ICE investigation. Training inputs and advice regarding wellbeing were included in detective training programmes, and privacy screen filters were added to bespoke monitors that were used to view IIOC in open-office environments. This enabled staff to be in contact with colleagues while viewing IIOC, while ensuring that no-one else viewed the images at the same time. This improved the ergonomics of the social space in which the ICE staff operated. Psychological screening assessments were promoted among ICE investigators, staff and supervisors. IT equipment was adjusted to equip investigators with the tools they needed to do the job, reducing stress and frustration. Senior officers recognised the potential negative impact of viewing IIOC and provided key messages recognising this to staff and officers.

My work and this study provided evidence that viewing IIOC and taking part in ICE investigations can have a negative impact on wellbeing for some police officers and staff. The severity and volume of exposure can be extreme and appears to be increasing. This could result in greater harm to the officers and staff involved. Police officers and staff have reported that the impact of viewing IIOC had required them to seek medical interventions, and this was most acute when bespoke wellbeing support had not been provided. Officers and staff also took forms of leave other than sick leave when they were mentally or physically unwell. To continue to safeguard the most vulnerable in our society, we must look after the people protecting them. The wellbeing of staff involved in the traumatic and complicated work of ICE investigation, both specialist and non-specialist, must continue to be a priority for law enforcement organisations moving forwards if they are to successfully achieve their safeguarding mission.

Hesketh I and Cooper CL. (2017). ‘Managing Health and Wellbeing in the Public Sector: A Guide to Best Practice’. London: Routledge.

If you would like to find out more about the welfare support offered by the National Police Wellbeing Service, go to Oscar Kilo.

Neil has had a varied 19-year career completing uniformed and detective roles, including working in general duties, CID environments, response, proactive teams, neighbourhood policing, public protection unit and covert policing. He is currently the Partnerships Superintendent for Devon. He has been the force lead for child sexual exploitation (CSE), and is the South West lead for the Society of Evidence Based Policing. He works closely with the University of Exeter and has been involved in research projects that have been awarded funding approaching £1 million. He has a master’s degree in Police Leadership and Management. 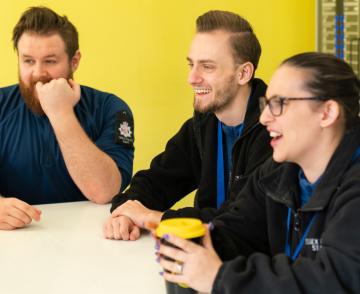 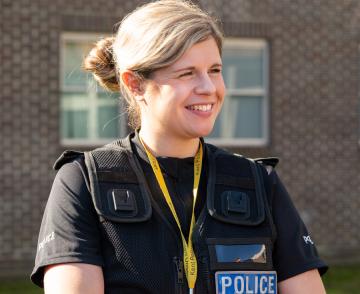 Looking after your health and wellbeing
CPD in focus: How everyone across policing can support each other through continuing professional development 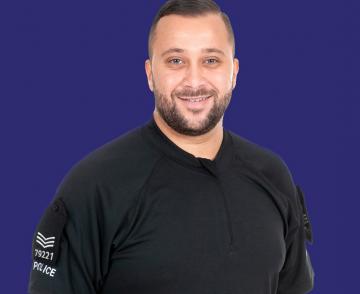 Be the change
Best piece of advice: I wanted to bring about change and an experienced sergeant helped me understand how I could