PCSOs provide a link between the police and the communities they serve. They bring essential skills, values and diversity to policing.

Police community support officers (PCSOs) have become an integral part of the neighbourhoods policing portfolio since their introduction in 2002. They provide a link between the police and the communities they serve. They bring essential skills, values and diversity to policing. A role profile for PCSOs can be found on the College of Policing website.

A valuable uniformed presence in our communities

Providing a valuable uniformed presence in our communities, PCSOs focus on understanding and identifying local priorities, solving local problems, tackling low-level crime and engaging with the community. They are often best placed to engage with those who either conduct or are affected by anti-social behaviour (ASB) and disorder.

The community support aspect of the role and effective partnership working with outside agencies should be the focus of the day-to-day activities of a PCSO as opposed to punitive enforcement activities. While enforcement is an important tool, the application of discretion alongside calm dialogue, guidance and support can be a far better instrument to bring about change in behaviour.

This supportive, preventative policing approach differentiates PCSOs from their police officer colleagues and promotes community cohesion by building relationships with key partnerships and groups across the community to resolve problems. A key feature of efficient neighbourhood policing is empowering communities to engage in initiatives that benefit them. PCSOs are key in the communication and coordination for this to be effective.

As the police service continues to ensure the highest standard of policing in the most efficient way, there is a need to ensure the wider policing family is fully integrated to meet the requirements of the community. PCSOs are now fully embedded in the police service. But, as with all other policing roles, fewer resources and newly emerging threats mean they are taking more of a leading role in providing a service to the public.

This handbook seeks to address the PCSO role and functions in the context of modern policing to ensure that they remain effective and to underpin the principles on which they were originally founded.

This updated handbook seeks to reflect the contemporary landscape and the ways PCSOs contribute to tackling new and emerging community issues and threats. It replaces the previous PCSO operational handbook, published in 2019, and reflects the changes and the development of the PCSO role. These include legislative amendments, entry routes (including the policing education qualifications framework (PEQF)), the 2018 neighbourhood policing guidelines, local policing delivery plan 2020-2022 and the ambitions set out in the NPCC Policing Vision 2025. The Policing Vision 2025 set out a road map for policing for 10 years from 2015.

The communities we serve are increasingly diverse and complex, necessitating a more sophisticated response to the challenges we face now and in the future

In 2013/14, the College of Policing consulted forces to understand how PCSOs were used and whether there was a marked shift from their intended purpose. A further survey was  completed by the NPCC in 2021 to update these findings. Extensive consultation with key stakeholders from both inside and outside the service has been carried out to identify the content required for the new PEQF PCSO curriculum.

Although this handbook is intended to define the PCSO role, it also continues to allow police chief officers and PCCs some local flexibility to address neighbourhood problems in innovative and forward-thinking ways, drawing on a clear evidence base of what works. Flexibility should be limited to making the best use of the discretionary powers available and not operating outside a PCSO’s employment terms and conditions or where they are not trained. They should not be seen as a substitute resource for tasks ordinarily undertaken by a police officer.

In 2017, the Policing and Crime Act 2017 was enacted, which affected the discretionary powers that chief officers can designate to their PCSOs. This handbook focuses on the PCSO-specific powers available to chief officers to bestow on their PCSOs. While some give access to additional available powers, research indicates that not all of those currently granted are used. Consideration should be made as to whether any power bestowed on a PCSO may cause an increase in enforcement rather than a community-focused non-punitive outcome. The use of discretionary powers by PCSOs, however, should remain a decision for chief officers based on their own policing needs.

With the introduction of PCCs there has been an appetite to broaden active citizenship in policing, and a number have committed to increase visibility at a time of reducing resources. This handbook relates solely to police employees who remain under the control and direction of their chief officer, with powers granted under statute.

In its 2016 police effectiveness report, HM Inspectorate of Constabulary and Fire and Rescue Services (HMICFRS) raised concerns that local policing had been eroded and that many forces had failed to ‘redefine’ neighbourhood policing in the context of reduced budgets and changing demand. In June 2018, the College of Policing, working with the NPCC and the Association of Police and Crime Commissioners (APCC) published neighbourhood policing guidelines to directly address this concern.

The guidelines contain a modern definition of neighbourhood policing.

The defining features of neighbourhood policing are: 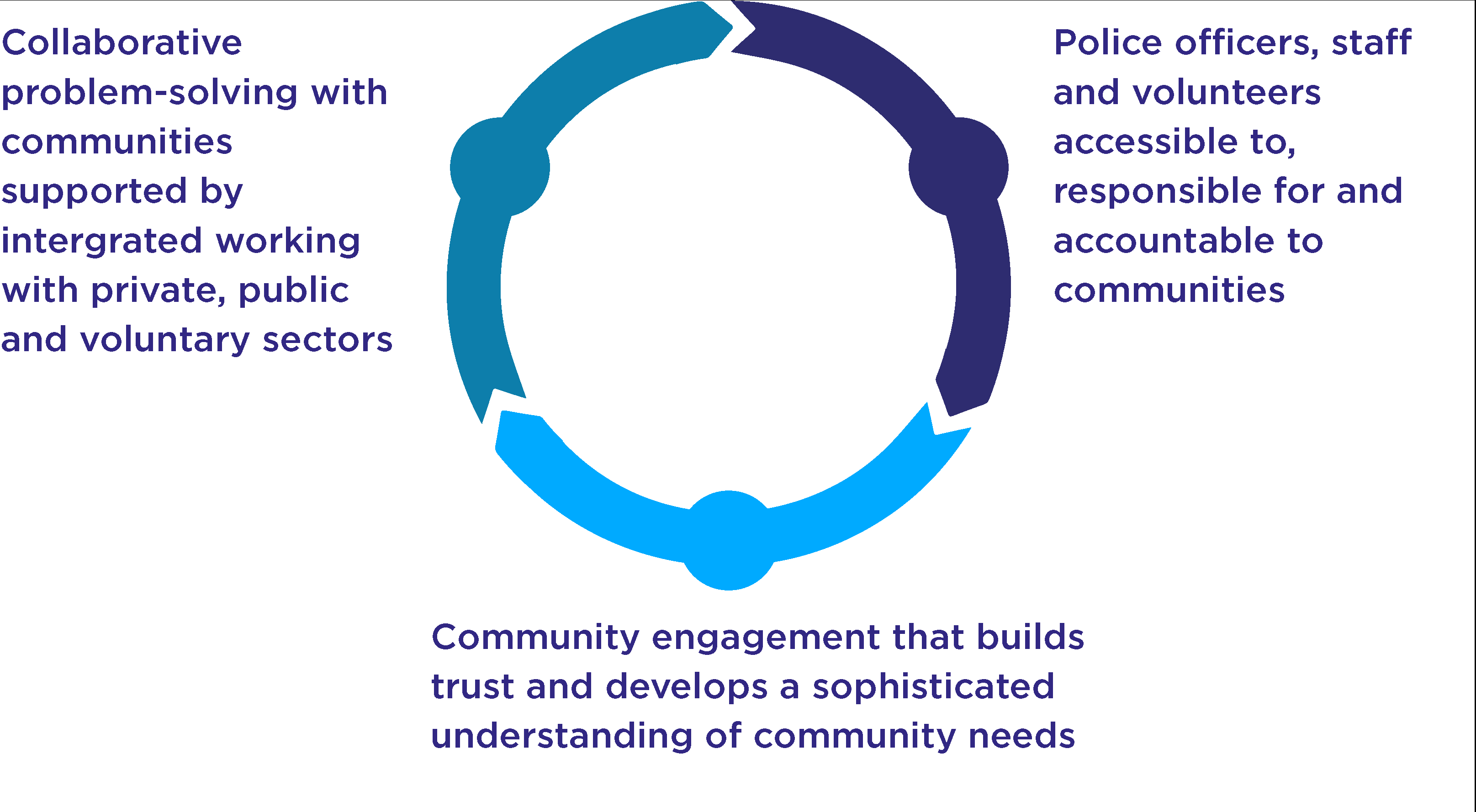 The combination of these features distinguishes neighbourhood policing from other broader policing functions. It is an essential part of the UK policing approach that aims to connect our communities directly and seamlessly to specialist policing services at a local, regional and national level. It recognises that those involved in neighbourhood policing need time and space to work in a proactive and preventative way to:

It encourages the use of locally tailored evidence-based practice, for a sustained impact on reducing harm, repeat demand and increasing community resilience. Alongside community engagement, it requires effective data sharing between different agencies for problems to be identified and properly understood, and for effective decision-making and action at the neighbourhood level. Defining problems with precision helps to better target action, assess the effect of interventions and ensure limited resources are not wasted on ineffective activities – all of which are key features of a PCSO.

Back to the handbook page